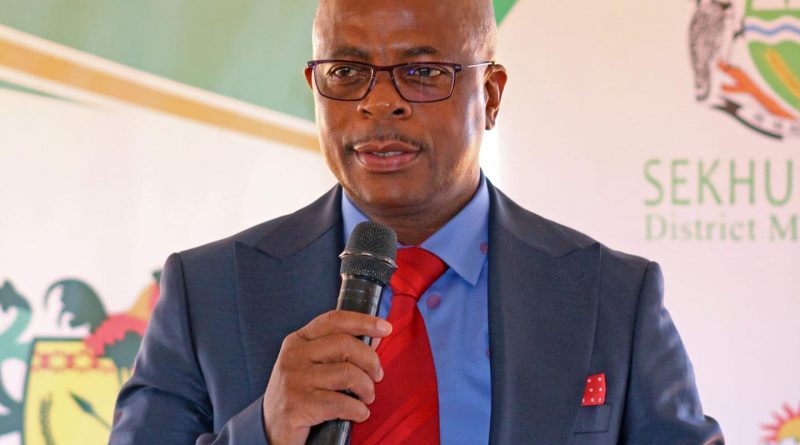 GA-MASEMOLA – The water services challenged Sekhukhune District Municipality (SDM) has announced that its total annual revenue budget in the 2021/22 financial year amounts to R1.5 billion, a decrease of about 7 percent from the 2020/21 financial period.

The district municipality which has been marred by water crisis for years assured residents that was expected to increase back to R1.6 billion and further to R1.7 billion in the 2022/23 and 2023/24 financial years respectively.

According to the district municipality with four local municipalities under its jurisdiction, the aim of the 8 percent tariff reduction in the 2020/21 financial year was to help vulnerable groups, including businesses, to mitigate effects of the economic impact of the pandemic and relieve them for the purpose of consumer confidence enhancement.

Ramaila made the announcement in his budget speech during a council seating in Ga-Masemola on Thursday, 20 May 2021.

The executive mayor said that the municipality’s own revenue sources included the interests earned on external short-term investments at R17.5 million, and service charges at R95.5 million.

The office of the Executive Mayor has been allocated an amount of R42.2 million. The Municipal Manager’s office will receive R73.7 million. The district’s mostly challenged Infrastructure and Water Services Department (IWS) has been allocated the lion’s share of the budget at R531 million. This amounts to 48 percent of the total operating expenditure. Budget and Treasury receives second highest chuck of the budget allocation at R201 million.

“The operational expenditure among other things includes the bulk purchase of R130 million for operations and maintenance, R40 million payment to ESKOM, R61.1 million for repairs and maintenance of our water infrastructure, and R100.1 million for depreciation and impairment on projects that are vandalized and destroyed by some of our communities. R6.8 million has been allocated for the legal expenses while just over a million rand was allocated for both external and internal bursaries,” informed Ramaila.

The district municipality informed that its current total allocated funds for salaries were at 42 percent of the total operational cost. The total annual capital budget for the district is R424 million for 2021/22 financial year. The annual expenditure is funded through the R413 million in Municipal Infrastructure Grant, R2.3 million in Rural Road Asset Management System Grant and R8.1 million in own revenue funds.

Coalition falls down in Modimolle as the EFF pulls off