A hard working man from Ga Mphahlele area outside Lebowakgomo said he grew up loving agriculture. Agriculturalists, Nelson Lesetja (28) said he was inspired by his former agriculture teacher to study agric.

From that day he was inspired, Lesetja never turn blind eye to his love towards animals. After completing his matric at Lehlaga high school he went to Tompi Seleka College to study Animal production from 2015 to 2018.

He is currently an intern of Agri SETA at the college.

Lesetja describes his undefeated love over animals “I love animals because they don’t give me stress. Period I spend with animals is priceless, but I hate to see them dying,”

He stated the kind of animals he looks after “Pigs, dairy cattle, beef cattle and small stock such as sheep and goats,”

His former teacher told him about job opportunities in the sector.

Lesetja wishes to own his own land in the future where he will be able to produce his own product.

“Owning a piece of land is privilege because every resource you see in this country comes from this land,” he stated.

Speaking of challenges in his current employment he said shortage of food results in high rate of animal dying.

He said shortage of medication is also a major challenge.

“Shortage of medication for animals is major challenge as well,”

Not only that, worries this young agriculturalists, even the outbreak of epidemic causes by climate change.

He said people should start to invest on agriculture. 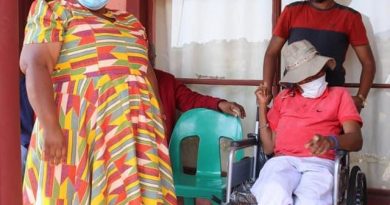