Topa Nama Mashabela Development (TNMD) has joined other organisations to raise awareness against scourge of Gender Based Violence (GBV). The organisation is calling on South African men to change their behaviour saying enough is enough.

On father’s day they took to street along R579 road between Jane Furse to Lebowakgomo to show motorists numerous placards written different messages. All lockdown regulations under level three were followed during demonstration.

They started from Nkgonyeletse high school to Mphanama cross in support of other peers from Mamone and Jane Furse.

Two placards which were on everyone’s lips were quoted “my body is not a crime scene ‘Don’t’ means NO”. “I don’t want to die with my legs open”

According to Nkgokologe Mashabela who is a secretary of TNMD they wanted to send a strong message to the perpetrators during father’s day.

“Well the march went successfully despite short notice. One would agree with us that we released our statement late but I am with the support we got,” said Nkgokologe.

Nkgokologe said they informed ANC ward councillor about their march and he gave them go ahead but instructing them to follow lockdown regulations.

“Men should love women and children not being at war with them. Children and women are vulnerable and defenceless, therefore killing of them is disgusting,” he said

He said it was unacceptable to sit back and fold arms while women and children are dying.

“Ticking of horrific news about rape, the killing of women and children must come to an end. Recently Tshegofatso Pule was killed with unborn child. How would you be a great man if you kill innocent child?

Nkgokologe said a lot however still needed to be done starting with the criminal justice system, adding that judiciary has a role play as peacemaker.

He said perpetrators must be punished harshly for their offenses.

“No bail no parole for rapists. We appeal to the police to treat rape cases with seriousness it deserves,” he said. 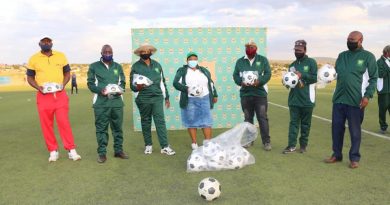