Mabena, author of books #Tears of Life, released in October 2019 and The Tears of the Crawling Hustler & Dreamer, released this year, has been nominated on both his books in best author and best book category.

The vibrant lad said his nomination for ISAPA came as a result of him being the first young author to release two books in a short space of time in the South African writing industry.

“To be honest, the first time I received a call from International South African Poetry Awards organizers, telling me that I am nominated, I could not believe it because I just released both books a few months ago and am now nominated on the biggest awards in South Africa. This nomination inspires me to write more books and proves to me that nothing is impossible as long as one puts their mind to it and work really hard, which pays off,” smiled Mabena.

Mabena requested his readers, especially those in Limpopo, to vote for him as many times as they could because he was nominated with big names such as Linda Ntuli, Unathi Msengana, Masoja Msiza AKA Nkunzi in popular soapie Uzalo and other South African poets and writers.

“Please vote for me as you would know that charity begins at home. I am requesting everyone to vote for me as many times as they can because every single vote from them counts. I really want to bring this award home in Limpopo, Sekhukhune,” appealed Mabena.

ISAPA’s ceremony is envisaged for the Durban ICC in October this year. To vote for Mabena, sms ISAPA KA 174 to 45633. 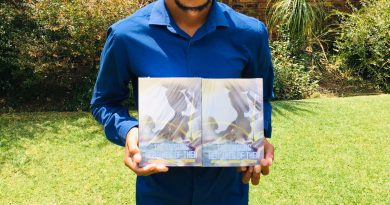