MOUTSE – Sekhukhune District Municipality Executive Mayor, Stanley Ramaila, congratulated Ndlovu Youth Choir on their incredible journey at America’s Got Talent show which was held in the United States of America with its finals taking place on 17 September 2019.

The executive mayor said on behalf of the people of Sekhukhune, the province and country, they unleashed their warmth as they appreciated Ndlovu Youth Choir for displaying such magnificent excellence during the world class show.

Ramaila said the choir had seamlessly entered the world stage overwhelmed the rest of the globe with brightness throughout the competition.

He said their singing and dance remanded them of their African heritage and as proud South African they were perplexed that the group of young had reignited and rejuvenated their ancient roots.

“Today the flags in Sekhukhune are flying high because of music. And this proves a long held strong view that music is a universal language. And Ndlovu Youth Choir puts concrete expression to a view that music power, even during the fight for liberation of our country, music has always played a pivotal role. Through song and dance, heroes and heroines were showered with praises, enemies were ridiculed and mothers were comforted after losing their loved ones at the battle fields. Historically, music remains one of the art to communicate messages against alcohol and drug abuse, gender based violence and other social ills threatening the future of young people” said Ramaila.

The executive mayor added that the joy that currently enveloped people of Sekhukhune was overwhelming.

“The foot print has been registered by the Ndlovu Youth Choir in America will remain an everlasting rubber stamp that represents African excellence.  Today, the choir aroused interest from young and the old countrywide and the whole nation sends its unwavering support to the choir. The generation of young people belonging to Ndlovu Youth Choir today joins the cream of African men and women who excelled on the international stage. They are counted along the likes of the late Mama Africa, Mariam Makeba, Brenda Fassie, Mama Leta Mbuli and many more. Sekhukhune has traversed with Ndlovu Youth Choir throughout their remarkable journey in the competition and enjoyed every minute of their performance, for us, they are our champions,” concluded Ramaila.

School receives much needed gifts from department of education 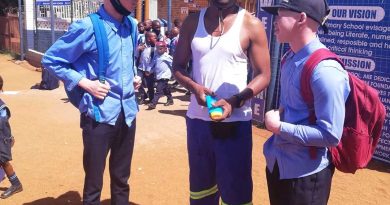