GROBLERSDAL – Residents in the Groblersdal Police Station’s neighbourhood fear for their safety after rubble composing building material, including corrugated iron sheets and poles, remain unresolved within the station’s yard.

The residents complained that the unresolved rubble lay at the station for months and had potential to attract dangerous reptiles for refuge.

The unsorted material lay at the station for more than three months after the red-ants delivered them there when they evicted more than 700 families from a privately owned property of Sekhukhune TVET College outside Groblersdal.

Neighbours who are directly affected by the unattended rubble are elderly people who are housed at the Herfsakker Old Age Home which is separated from the station by fence.

The elderly at Herfsakker told the paper they have since the rubble’s existence, experienced problems of snakes and mice which they haven’t had before.

“They must do something about the rubble. Our lives are now being exposed to danger because of it. It must be removed from here. The other problem is that if it can catch fire it will burn our home,” said one of the elderly.

A client who also did not want her name published in the paper said: “The concerns of the residents are valid. Accumulation of rubble could be dangerous in whichever way imaginable. The matter should be urgently addressed. This is one of the places at which we should feel safe from any kind of danger.”

Captain Manong Tshehla, Groblersdal Cluster Police Spokesperson, referred all queries to the sheriff of the court.

Tshehla said the belongings were merely at the station for safe keeping after their owners were evicted from Aquaville.

“We have no control on the matter in terms of when and how they will be removed from the station as they are only here for safety reasons. That lies solely with the sheriff of the court,” said Tshehla. 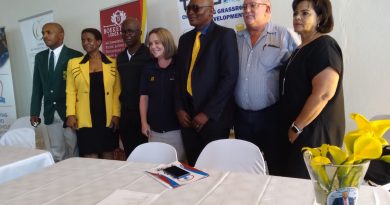 A cyclone of excellence to hit Limpopo