MABITSI – A total of 269 households in wards five, nine, 10, 12 and 13 in the Ephraim Mogale Local Municipality villages were provided with electricity in the 2017/2018 financial year.

This Kupa said during the State of the Municipal address in Mabitsi village last week adding that while working hand in hand with Eskom to address the backlog of over 950 households that needed electricity connection, the local municipality had also drafted an Electricity Master Plan aimed at addressing public lighting – street and high mass lights.

The mayor added that 29 new households electricity connections would be made in Matlala “A” Ramoshebo, 34 in Mogalatsane, 40 in Matlerekeng, 53 in Morarela, 130 in Leeuwfontein RDP, 115 in Malebitsa, 75 in Mamphokgo and 24 in Mohlalaotoane extensions, totaling 500 in eight wards during the 2018/2019 financial year.

On 2017/2018 infrastructure development, Kupa said internal street projects, Dichoeung with an expenditure of R7.5 Million had been completed, Ngwalemong with a R9 066 558.52 was at 3.025km and busy with V drain and finishing off, at 80% status, Letebejane-Ditholong internal with expenditure of R9 495 574.87 had 2.1km surfaced road and busy with V drains and bus-bays at 78% status.

On education and youth development, Kupa said in addition to the local municipality’s history of assisting deserving well performed students, it would be introducing a massive Career Guidance and Wi-Fi connectivity in all wards within the current financial year to assist youth in choosing careers relevant to demands of the economy and also apply to tertiary institutions.

Furthermore, Kupa said the local municipality has allocated R750 000 to continue with the graveyard fencing project and fence seven graveyards during 2018/2019 financial year.

The local municipality has budgeted for total revenue of R282 Million in the 2018/2019 financial year which is an average increase of 3% from 2017/2018 for operation and capital expenditure. 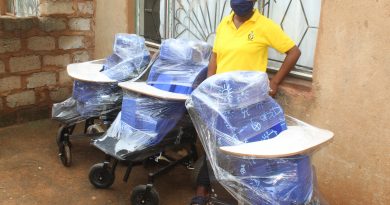 Rakgoale urges residents to break the silence on gender based violence