The Thohoyandou community as well as the Limpopo government is still mourning the death of well-known former educationist and Principal Edward Mphaya Mphaphuli.

Mphaphuli passed away on May 27, he was 85 years at the time of his death.

The past week saw big wigs in the political fraternity visiting the family to console them during a memorial service.  Amongst the political figures that descended the province was Inkatha Freedom Party’s Mangosuthu Buthelezi who shared his heartfelt messages with the family during the memorial.

Speaking during the memorial service Buthelezi said he was humbled to honour his last respects to the Mphaphuli family.

“I have come because of the admiration I have for Mr Lufuno Mphaphuli. As he grieves the loss of his father, I offer my sincere support and condolences. I do this as one who is well-acquainted with grief myself. Indeed, I have stood at the gravesides of my own parents, countless friends, and even my own children. I have been comforted in my times of grieving, and I hope now to bring some comfort to you,” said Buthelezi.

“Many words will be spoken today about Mr Mphaphuli, about his character and the kind of man that he was. But I feel that we have a living testimony to his values – in his beloved children.

“Their lives speak of the leadership and love of Mphaphuli. Together with his wife, he raised his children to be people of substance, teaching them how to put others first.

Buthelezi further said he was deeply touched by the generosity of Mr Lufuno Mphaphuli.

“When we attended the Easter Service together at the United Congregational Church of Southern Africa, in Inanda. The church was raising funds for a new building and, of his own accord, Mr Lufuno Mphaphuli made a substantial donation.

“This was not his own church and he would not benefit from the new building himself. But he wanted to invest in something of value, and I think that says a great deal about his character. I can only imagine that such wisdom was fostered by a father who understood what matters. I therefore honour the late Mr Edward Mphaphuli added Buthelezi.

Buthelezi prayed that the Mphaphuli family experience the Lord’s healing. May you know that this is not “goodbye”, but rather “until we meet again”.

The burden has been lifted from Mr Edward Mphaya Mphaphuli. Today, he is with the Lord. 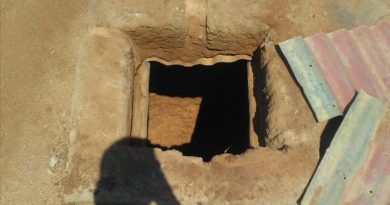 No service delivery in Ward 19

Teams increase the heat as play-offs near