LEEUWFONTEIN – Lack of access to running water continues to hit hard on residents of Leeuwfontein Township outside Marble Hall.

Residents complained they went without running water for over three weeks since last month, being hazardously forced to fetch from nearby drenches and streams where animals drink, while those who afforded costly bought from sellers.

The residents further claimed they were not informed of the problem since their taps ran dry.

However, George Mmakanyane, ward 08 councillor, said when the problem started they went to the streets and informed the residents.

Mmakanyane said the problem was a damaged pump and that it was bought last Friday and is expected to be fitted, after which residents would again have access to water, possibly on Thursday (today, 12 April 2018).

Kodibona Seroka, a resident, said she wished the municipality could move at speed to ensure water was restored, so they could stop sharing with animals putting their health at risk.

Seroka said they were adversely affected since the water supply stopped more than three weeks ago.

“Without water we are really having it hard. We have toilets that need flushing. The water we fetch from the streams is not safe for us but we have no choice,” said Seroka.

Nthole Mphela, also a resident, said they couldn’t do anything since the problem started about a month ago.

“Yes we were informed about a damaged pump. They were going through the streets to tell us about the problem. What the municipality needs to do is to intervene through digging boreholes. The problem is not new in these area, it has been going on for years,” said Mphela.

Mologadi Maelane, another resident, said the situation hit hard on the residents as they were forced to buy water.

“We are unemployed and buying water comes costly for some of us. The municipality must help us speedily solve the problem,” concluded Maelane.

Local fashion designer joins in the fight against Covid-19 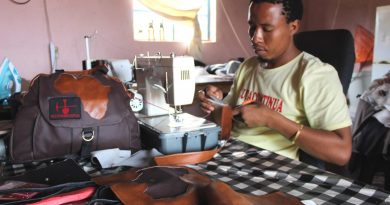