The resolution emerged from a meeting with the area’s community leaders on Friday following violent protests that marred the area from the early hours of Wednesday 07 March 2018 morning.

Angry residents barricaded the N11 public road between Groblersdal and Marble Hall with burning tyres , tree trunks and rocks as they demanded the answers from the local municipality on the area’s halted electrification project which started in June last year.

Two weeks ago the residents peacefully marched to the local municipality’s offices in Groblersdal and submitted a memorandum demanding the continuation of the halted electrification project, a school and a cemetery.

Isaac Kgatla, a community leader, said the residents were angered after the municipality failed to respond to the memorandum within seven days they gave them.

Kgatla said a delegation was sent to the municipality to enquire about the delay in responding to their memorandum but the local municipality refused to meet them and that made the community angry.

Ngoepe said the of the arrested eight, Daniel Tjiane (49), Jim Selwane (52), Johannes Mosotho (58), Joyce Skhosana (39), Jonas Mokwana (59) and Peter Mohlala (48) were released on warning when they appeared before the Groblersdal Magistrates Court on Friday 09 March 2018.

“Apart from the mentioned suspects, three illegal immigrants who were arrested for the same chaos were denied bail based on their stay in the country without documents. They are Majada Munashe (32), Bernard Phakula (23) and Lawrence Dube (31),” said Ngoepe.

The three are expected to appear before the court soon for violation of the Immigration Act.

Motsoaledi Ledwaba, a community leader, said they were promised the contractor would start with the electrification of the project this week and residents welcomed the Exco resolution.

Kgwale added the issue of a cemetery for the area would be looked into once the area has been proclaimed. 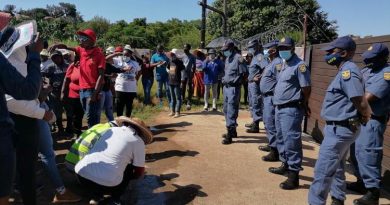